The Union of Myanmar was known as Burma until 1989. It is bordered by China, Laos, Thailand, Bangladesh, and India and has a population including over 135 ethnic groups! It was conquered as a province of British Colonially held India in the 1800s but became a self-governing colony in the 1900s, and finally achieved independence in 1948.

The country shows its appreciation for the peasant farmers by holding Peasants' Day as a national holiday every March 2. Ironically it was also on this day in 1962 that General Ne Win led the military coup and the country also holds parades on this day to honor him.

One of the many styles of drums ion Myanmar (remember those 130+ different ethnic groups—there are a LOT of different drums and drumming styles!) is the Dong Sun bronze drum, also known as a Rain Drum or sometimes Frog Drum as they were played to produce rain! 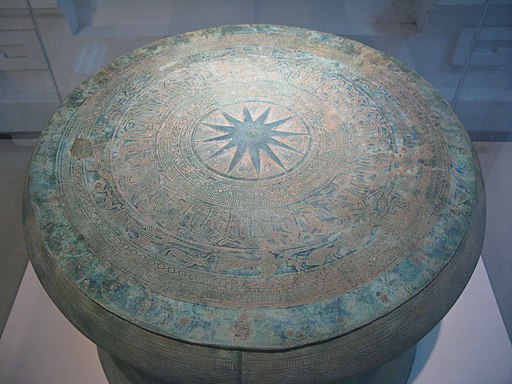 I first saw these drums on Ebay; the description said they were positioned outside in gardens to allow the rain to play them. Embarrassingly, as a professional percussionist and constant drum tradition researcher, I believed this misinformation until I was researching them for this blog!

Here are some of the phrases heard in this style of play. And here is one of the source videos for the playing style and parts. See if you can locate which phrase(s) come from this footage!