The Spring Equinox is the perfect time for a festival to celebrate the seasonal change from Winter to Spring. Easter, the celebration of which is linked to the date of the Equinox: from 325 CE, the Council of Nicaea established that Easter would be the first Sunday, after the first Full Moon that landed on or after the vernal equinox, absolutely has an obvious rebirth theme, appropriate to the season.

Pagans and Wiccans seek to link this to a pre-Christian goddess in England, Eostre, celebrated at beginning of spring. However, the only reference to this goddess comes from the writings of the British monk the Venerable Bede, from the 7th-8th C. AD, and those writings do not support the majority of the details in these claims—he identifies the name of a local Goddess who had feasts during Eosturmonath (Easter month) and that's it. No mention of rabbits or eggs, etc. However, there were absolutely pre-Christian celebrations pretty much anywhere there were pre-Christians at this time of year!

The Druid Order Ceremony at Tower Hill in London City on
the Spring Equinox of 2010. (Photo: Lpendred / Public domain)

We are going to focus on Spring as the season of new life. As the ground warms, one of the first critters we begin to see emerging is the serpent. Go back far enough in pretty much every culture and we find a sacred serpent associated with the cycle of life, death and rebirth. 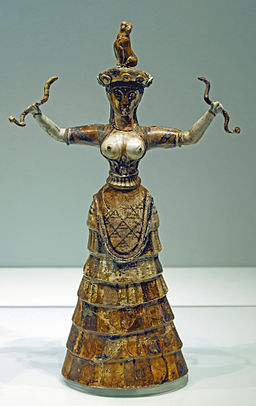 The "Snake Goddess", as discovered and restored by Arthur Evans. 1600 BCE.
Note: this may be in part or whole a fabrication, but it is hella cool.
(Photo: Heraklion Archaeological Museum/CC0)

In Scotland at this time of year, the Highlanders pounded the ground with a stick until the snake emerged. How long this took and how alert the serpent was gave them a good idea of how much frosty weather remained!

There is actually a poem in honor of the serpent emerging, recorded in the Carmina Gadelica (Poems and prayers from the Gaelic tradition of oral poetry):

The serpent will come from the hole
on the brown day of Brighid
though there may be three feet of snow
on the surface of the ground.

Brighid is the primary female Celtic divinity—so here we have a fantastic link between the Vernal Equinox, the Goddess, and the Serpent!

For our rhythm for today we are going to look to the serpent God and Goddess of Haiti: Damballah and Ayida-Weddo, his wife. In their veve (sumbolic representation) they are the two serpents. The rhythm played to honor them is called Yenvalou. Here is a basic version of the fundamental parts: