As a Chicago Irishman, I know what St. Patrick's Day is all about: Green clothes, Green Shamrocks, a Green Chicago River, and Green Beer, all leading to a queasy greenish hue the following day until the Excedrin Migraine pills take the edge off the hangover. But there's more to the story. 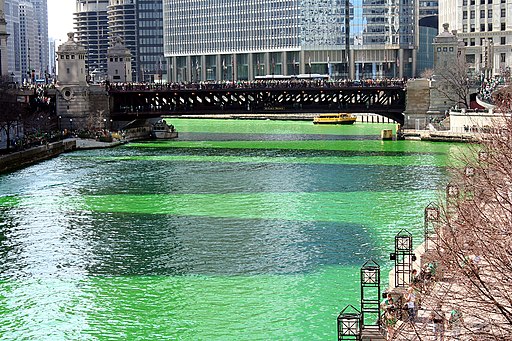 The patron saint of Ireland was actually born in Roman Britain in the late 300s AD. His given name was Maewyn Succat and he also thought it succat so he went by Patricius (and several other names besides but Patrick is the one that stuck). He was captured by Irish pirates at 16, enslaved for six years as a shepherd, learned the Irish language and culture.

He tried to escape back to Britain and was captured again, by the French, where he was held in a monastery until he was sent back to Britain. After continuing to study Christianity, he had a vision that he was to return to Ireland and bring Christianity to the pagan and Druidic heathen there.

The heathen were not so hot on his preaching, however, so he retreated to some coastal islands. He needed better marketing, and legend holds that he used the Shamrock to teach the Irish about the Holy Trinity. Since they already had triple deities and triskelions and Bardic Triads in their poetry, the number three was mad popular already and the use of the shamrock may have procured Patrick a great deal of favor with the Irish.

Folklore also talks about Patrick banishing all the snakes from Ireland, but science tells us there never were any snakes on the island to begin with. This is often held to refer to the Druids and the pagan religion, for whol the serpent was a sacred symbol.

Patrick is not technically a Catholic canonized saint, but as good Catholic Irishmen, we just don't care. He died on March 17, in the year 461 AD. The first ever St. Patrick’s Day parade was held in Boston in 1737.

We are of course going to play some quintessentially Irish rhythms to celebrate! We will focus on that magical number 3: The Slip Jigs are in 9/8 time. The first one is a basic Bodhran pattern for the Slip Jig; the next 2 are melodic adaptations of some famous Slip Jigs for hand drum.