A tribute to the grasshopper-chaser St. Urho
stands in a park in Menahga, Minnesota

Saint Urho is an entirely fictional saint. He was created by a Finnish-American named Richard Mattson in the 50s. Richard was questioned by Irish co-worker Gene McCavic as to why the Finns had no Saint of Patrick's stature, whose legendary feat of banishing all the snakes from Ireland is celebrated ever St. Paddy's Day.

Mattson and McCavic wrote the Ode to St. Urho, in a mock Finnish immigrant jargon. (In the original he chased out frogs, but this was amended to grasshoppers as a more relevant varmint, and this allowed the legend to include saving the Finnish grape crops.)

So let's give a cheer in hower pest vay
On Sixteenth of March, St. Urho's Tay.

Let's put a bit of English on that:

One, two, three, five
Saint Urho is the boy for me.
He chased out the grasshoppers that were as big as birds,
Never before have I heard those words.

He really told those bugs of green,
Bravest Finn I’ve ever seen.
Some celebrate for St. Pat and his snakes,
But Urho boy has got what it takes.

He got tall and strong on feelia sour (sour buttermilk)
And ate kalla moyakka (fish head stew) every hour.
That’s why that guy could chase those beetles,
That grew as thick as jack pine needles.

So let’s give a cheer in our best way,
On the sixteenth of March – St. Urho’s Day!

Urho in Finnish means bravery or a hero.

The original Ode placed St. Urho's Day on May 24 but this was changed to March 16, the day before St. Patrick's Day, so the Finns could start drinking a day before the Irish.

His feast is celebrated by wearing Royal Purple and Nile Green. St. Urho's Day is now observed in areas in Canada and Finland as well as the U.S. The first statue of St. Urho is located in Menahga, Minnesota. 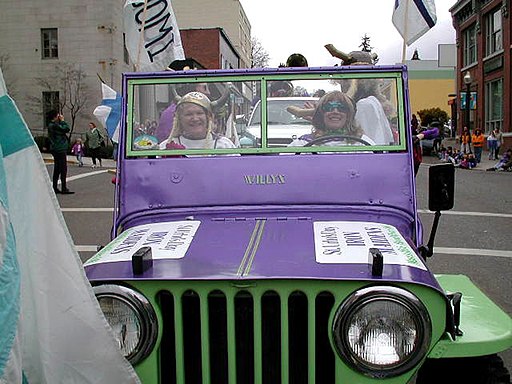 Finland is known for it's living tradition of Shamanic drumming (and Shamen are known often for their Trickster side!), so we will be playing an exercise in drumming in Shamanic fashion.

The following video featuring Arto Ukko Hämäläinen demonstrates skillful Shamanic drumming. They keep the rhythm at just above 60 BPM, the correct speed to entrain into Theta without risking falling asleep. There is little variation in the drumming except for subtle play with the accents—just enough variation to minimize habituation and maximize the Frequency-Following Response in the listener's brains.

Of his approach to drumming, Arto stated:

The most important thing about the drum has been beyond reach. The drum has silenced the sound of sense and opened the door to the senseless world. Does it sound absurd? That is what I mean. Senses help us in our human life but they have boundaries. They are necessary for the survival of the humankind and for to do everyday chores. But the limits of the senses are tight. When we move on to creativity, mind can say "absurd" or "childish" and produce the idea of "it’s not true". However, The Universe really starts from where the boundaries of mind end. This was known by shamans, witches, and healers.

I also love this poem:

THE SPIRT OF THE DRUM

I take my Drum and play

I Drum to the Sun
Who brings heat
To cold villages


I Drum to people who
Lost their light


With rhythm of the heart
I Drum Love.

Here are a few of the accent patterns used in the drumming to add just enough variation into the trance-induction beat: