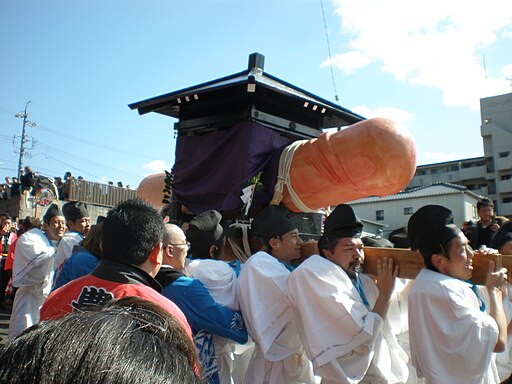 The Tagata Jinja Shrine, estimated to be over 1,500 years old, lies in the ordinary Japanese suburb of Komaki, hosts the yearly Honen Matsuri. Hōnen means prosperous year, thus a rich harvest, and matsuri means festival—but in colloquial language this is simply referred to as the penis festival. Every year at about 3 pm, the temple's largest resident—a two-meter-long, 400+ kilogram wooden phallus, carved from the trunk of a single cypress tree—is carried through the streets and swiftly spun around the temple.

The Shrine is filled with many other phallus shaped stones and statues, and celebrants at Honen Matsuri line up to rub them, to ensure fertility and a good harvest for the coming year.

The party starts at 10 am and you can shop for penis-shaped souvenirs for your friends while feasting on remarkably penis-shaped candies, cakes, and cookies. Yes, this is one festival where it's OK to eat a bag of dicks. (Sorry. Once I thought that, I tried but could not stop myself from typing it.)

During the parade, phallus-toting women hand out free glasses of Sake.

In the interest of equality, we should note that on the Sunday closest to Honen Matsuri, the nearby Oagata Shrine holds a harvest festival celebrating the female genitalia.

There is Taiko drumming at the Shrine every year, with children prominently featured among the performers. These rhythms may be played orchestrated simultaneously, or in a predetermined sequence.