Saor Dhoire or Free Derry was a "self-declared autonomous nationalist area" of Derry, Northern Ireland, between 1969 and 1972. The name was from a sign painted on a gable wall in January 1969 that read, "You are now entering Free Derry."

British and unionist politicians fumed at its mere existence, but the community was determined. By August 1971 English-occupied Northern Ireland was experiencing escalating violence and increased bombings. A new law was introduced granting the authorities the power of internment—imprisoning people without trial.

15,000 people gathered on a bright winter day for an anti-internment march on January 30, 1972. There was a heavy British military presence in town, and there were rumors that that presence included paratroopers, but everyone extected the day to remain peaceful. A little after 3 PM, the march began.

An hour later 13 innocent, unarmed men and boys lay dead; a 14th man died later and 17 others including two women were injured. They were shot down by members of the British Army’s Parachute Regiment. Some were shot in the back as they tried to flee; one was shot a second time and killed as he lay injured, and others were shot while they were trying to help the injured and dying.

Mural of the murder victims of Bloody Sunday.
(Wikimedia Commons)

The day is commemorated in Derry with marches, and at the end of the march people gather at Free Derry corner where the names of the victims are recalled. 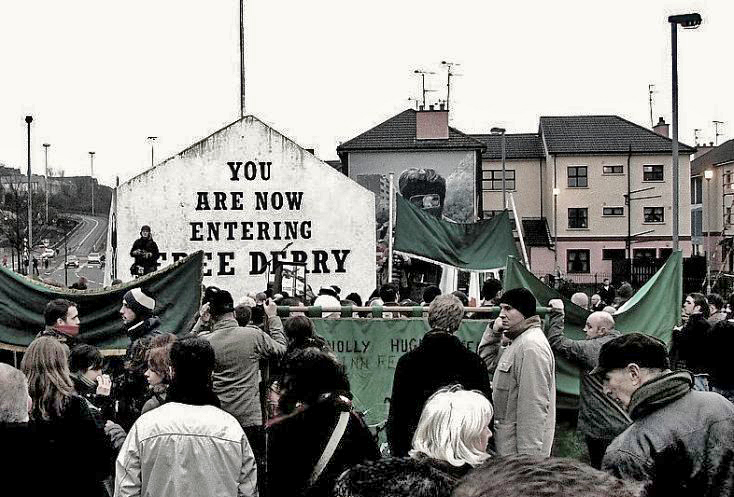 John Lennon was moved to write and record a song about the events of Bloody Sunday. Absent the refrain, here are the lyrics:

Well it was Sunday Bloody Sunday
When they shot the people there
The cries of thirteen martyrs
Filled the free Derry air
Is there any one among you
Dare to blame it on the kids?
Not a soldier boy was bleeding
When they nailed the coffin lids!

You claim to be majority
Well you know that it's a lie
You're really a minority
On this sweet Emerald Isle
When Stormont bans our marchers
They've got a lot to learn
Internment is no answer
It's those mother's turn to burn!

You Anglo pigs and Scotties
Sent to colonize the north
You wave your bloody Union Jacks
And you know what it's worth!
How dare you hold on to ransom
A people proud and free
Keep Ireland for the Irish
Put the English back to sea!

Yes it's always bloody Sunday
In the concentration camps
Keep Falls and roads free forever
From the bloody English hands
Repatriate to Britain
All of you who call it home
Leave Ireland to the Irish
Not for London or for Rome!

Here is the song:

Here is an orchestration of drum parts adapted from this song. A couple notes on the notation: