José Julián Martí Pérez lived from January 28, 1853 until May 19, 1895. He is remembered as a Cuban National Hero because of the part he played in the liberation of his country, and was also an important figure in Latin American literature. In fact his list of accomplishments is epic. He was a

It was his writings and political activity that made him a symbol of Cuba's bid for independence from Spain and earned him the title of the "Apostle of Cuban Independence." He worked to unify the Cuban emigrant community in America, and this support was vital to the Cuban War of Independence against Spain. He was the designer of the Cuban Revolutionary Party, and played a key role in planning and executing the war.

He died in military action during the Battle of Dos Ríos on May 19, 1895. His death became a rallying point for that independence and helped convince Cubans who were uncertain about revolution to accept its necessity. 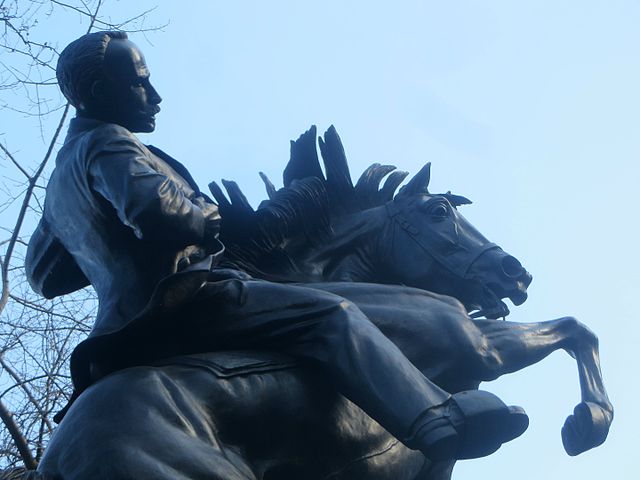 After his death, 4 verses from his poetry book Versos Sencillos (Simple Verses) provided the lyrics for the song "Guantanamera," which has become the definitive patriotic song of Cuba.

The following is a traditional latin percussion arrangement adapted for Guantanamera. The bell pattern is referred to as 2-3 Clave; see our Mad Drum Circles Skills book for a lot more information on Clave! The Clave pattern would traditionally be played on Clave (Dense, hardwood sticks that are struck together to keep the time). The Mid Drum is adapted from a pair of Congas for a single drum, and it is a variation of a traditional Tumbao rhythm (for more on that see The Encyclopedia of World Rhythms, Volume I). The High Drum pattern is adapted from Cajon (Box drum) playing. While I used several sources for this orchestration, the one it is closest to, and my personal favorite, may be viewed here: