Traditional Day of Offering is a holiday for giving thanks. It is celebrated on the first day of the twelfth month of the Bhutanese calendar (typically in January or February in the Gregorian Calendar).

Zhabdrung Ngawang Namgyal was a Tibetan Buddhist lama who moved to Bhutan and founded the Buddhist Chagri Dorjeden Monastery in 1620. Three years of isolation and reflection later, he created the Drukpa Kagyu monastic order in Bhutan. From a Dzong (fortress) he built in Simtokha, he began unifying the fractured and rivalrous fiefdoms in Bhutan. 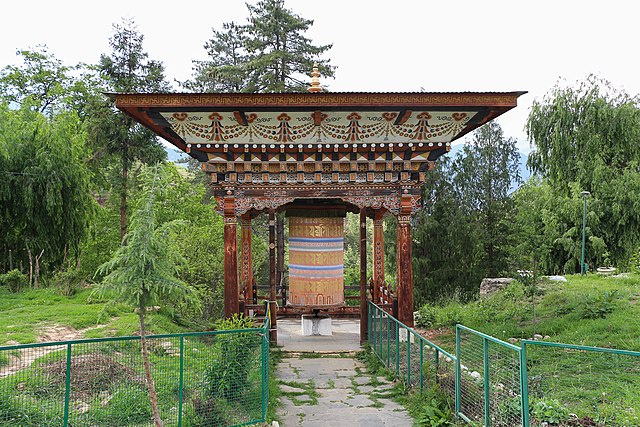 He unified a fractured Bhutan as a single country by winning the Battle of Five Lamas in 1634. He was known for being literate, intelligent, compassionate and considerate. He established the Cho-sid-nyi system, under which the country is led by both an secular administrative leader and also a spiritual one. In modified form, the practice continues today.

So the Traditional Day of Offering celebrates Ngawang Namgyal and also focuses on charity. People are encouraged to offer food to the poor on this public holiday. They also celebrate by playing traditional sports like archery and digor (a Bhutanese sport similar to Bocci Ball, in which stones are thrown underhand to get as close as possible to fixed targets), and of course feasting. People dress traditionally for the occasion: gho, a long robe with belt, for men, and kira, brightly covered woven dresses, for the women.

Donations and offerings are typically made to monasteries, and these offerings are inspired by the love and loyalty the people still have for Ngawang Namgyal.

Bhutan is known for using a principle of Gross National Happiness (GNH) as a holistic way of assessing the health of the people and the country which is not restricted to merely measuring economics like the gross domestic product, or GDP. This is challenged these days by increasing income disparity and the effects of climate change, but you gotta love the concept!

Bhutan also has many different types of drums, including chod drums, which are associated with spiritual dances. In Cham dances the practitioners summon the dakas and dakinis to the dance of ego annihilation. The sound of the drum assists celebrants to realize great bliss, clarity and awareness.

The sound produced from the drum signifies the wisdom or the empty nature of all phenomena, or the absence of any truly concrete identity. The reverberating sound of the drum is a symbol and a reminder of the ever-enriching Buddhist values of compassion and love.

Cham dances brings blessings, and are performed in order
to remove obstacles and bring happiness to all sentient beings.
(Wikimedia Commons)

I did not find specific dances for the Traditional Day of offerings, but here are the basic rhythms for Pa-cham, the Dance of the Heroes: