On January 18, 1943, Nazis entered the Warsaw ghetto to prepare a group of Jews for transfer to a concentration camp. The ZOB (an underground resistance organization) ambushed them, starting several days of combat before the Nazis withdrew, and it was several months before they resumed deportations.

Around 55,000 to 60,000 Jews yet remained in the Warsaw ghetto. When the Nazis returned, a few hundred resistance fighters, armed only with a small number of weapons supplied by anti-Nazi Poles, continued the fight. Despite being vastly outnumbered in terms of manpower and weaponry, they resisted for nearly a month, but the Germans systematically razed the Ghetto. Block by block they destroyed the buildings and bunkers, killing or capturing thousands of Jewish residents.

Shmuel Winter, a Jewish public servant in Warsaw, was tight with the ZOB in the ghetto. He kept a journal, and parts of it survived. He lamented the lives lost before the Jews embraced resistance:

"Today it will be half a year since our destruction began [July 1942]. Had we but resisted then, at least as much as we resisted during the last deportation [January 1943], the Nazis would not have succeeded so easily in destroying such a large Jewish community. . . . One shudders to think that it required a quarter of a million Jews to give their lives, for the remainder to understand the reality of the situation and come to the right conclusions."

In April 1943 during the Uprising, he was in the supply bunker at 30 Franciszkanska Street with other officials, and died there. 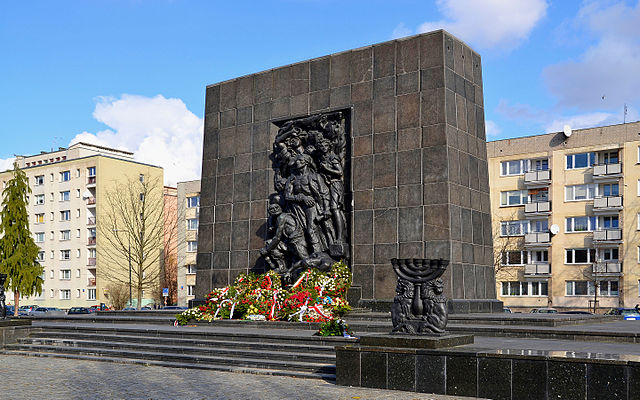 The bravery of the Jewish resistance deserves to be celebrated. Klezmer music (from the Hebrew kley, instruments of, + zemer, song) is a celebratory form of music which has been revitalized as part of post-Holocaust cultural preservation:

In a sense, the strong revival of interest in klezmer is due to the need to recover the civilization of Ashkenazi Jewry which was decimated in the holocaust.

—Moshe Denburg, Jewish Music of the
Ashkenazi Stream: I. Klezmer and Yiddish Song