Maron was a 4th-century Christian hermitic monk in Syria. He chose an ascetic life of quiet and solitude. He sought simplicity, and to learn to see how everything was connected to God. He did not believe the material and spiritual worlds are separate, and so believed that the material world is a source of spiritual experience and faith. He practiced earnest prayer, and sought mystical experience of God. 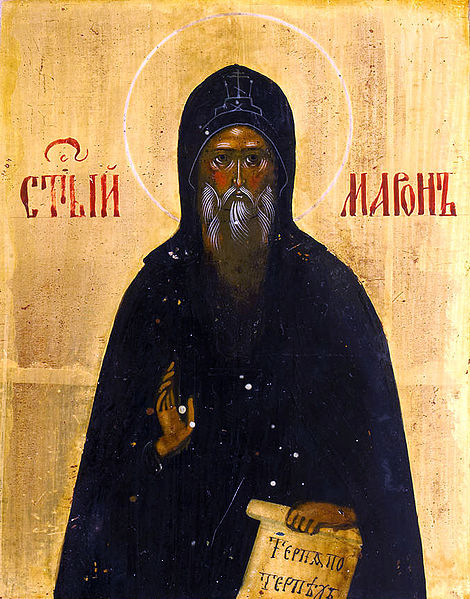 It is said he lived out in the open air next to an old temple which he had converted into a Catholic Church. This architectural conversion marked the beginnings of the conversion of Syria and later Lebanon to Christianity. His first disciple, Abraham of Cyrrhus, later known as the Apostle of Lebanon, brought the message of Maronite Christianity and converted many people. The Maronite cross: the three horizontal bars symbolize the Holy Trinity and also correspond to the unity of bishops, patriarch and pope. Syriac poets refer to this cross as The Tree of Life, and the leaves or buds at the ends of the arms symbolize the life that flows from the passion of Christ.

He spent his time outdoors in contemplation and one with the elements: Sun, rain, snow. This type of asceticism grew popular in Syria and Lebanon. He was passionate about sharing the word of Christ and was known for his preaching.

After his death in 410 AD, his followers started a movement that evolved into the Syriac Maronite Church, remaining a part of the Catholic Church. The religious community which grew from his inspiration are known as Maronites, and were drawn to his miracles and his deep holiness.

He had a great repute as a healer, and in a very holistic fashion did not limit himself only to ailments of the flesh. He also sought to heal the "lost souls" of those who came to him, regardless of their faith.

The archaeological site of an early Christian church in the basement of the Maronite Cathedral "Our Lady of the Seas" in Tyre/Sour, Southern Lebanon (RomanDeckert/Wikimedia Commons)

At many Maronite occasions, part of the celebration is a line dance called Dabkeh, or Dabke. This dance has a fascinating history!

"In the past, the roofs of houses in Lebanon were made of tree branches topped with mud . . . during the rainy season, the mud would crack and start to leak. Fixing it meant the mud to be stomped on in a forceful and steady manner . . . stomping on then was hardly a one-man job. This is why the house owner would call upon his neighbors for help and they would stand side by side in a single line and begin stomping in a synchronized manner . . . In order to maximize their synchronization, the men would improvise pattern for stomping that they would all follow. Just for fun, some of these stomping sessions were accompanied by music . . . and hence the dabke was born."

Even after the roofs were compacted with a stone roller instead, the community would dance the Dabke on the porch to celebrate the roof's completion. Thus the Dabke has been a symbol of fraternity, solidarity and virility because of its origin as a community gathering and the strength it was danced with.