Jeongwol Daeboreum is an ancient Korean festival celebrating the first full moon of the Lunar New Year, considered the largest and most bountiful moon of the year. Many of the observations on this day are to ensure health and prosperity for the upcoming year. It is rooted in Korea’s agricultural history, so it also is to guarantee fertile fields and good harvests.

The high point of Daeboreum celebrations is the Daljip: a huge bonfire made of straw or twigs, where possible built on beaches and as far away from buildings as possible!

"The Daljip is piled in a triangular shape, to create a ‘house’ for the rising full moon; a small door is set to the east for the moon to enter by. When the moon rises, the daljip is set alight to ward away evil spirits and bring luck for the coming year. As it burns, Koreans stamp on the ground in a ritual called Jisin-balgi, which is performed to comfort the god of the earth and encourage fertile harvests." 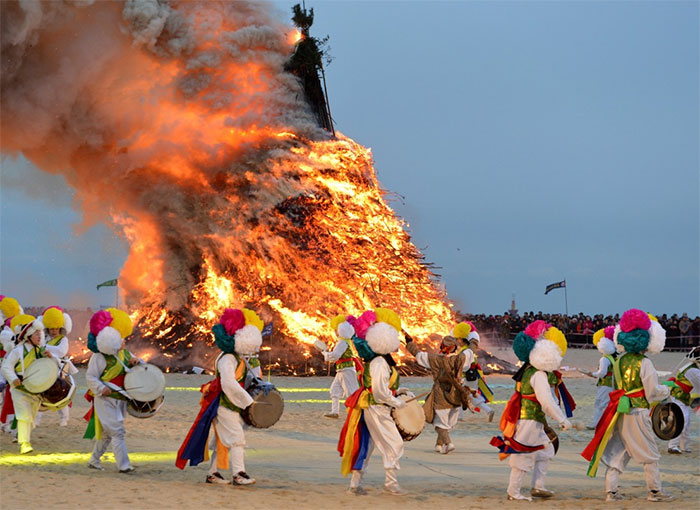 There are many other customs associated with this day. Jwibulnori is a children's game where charcoal fires are lit inside tin cans. The children go in the fields and whirl these around on strings; the ashes and embers fall onto the field, fertilizing the soil and, it is believed, chasing away evil spirits.

Deumdol is a competition which has its roots in ancient coming-of-age rituals. In this contest, participants carry a stone of 130 kg in their hands; the one who makes it the longest distance is the winner.

Dalmaji is the custom of climbing mountains (or elsewhere to a great height) in order to watch the moon rise; it is believed watching it rose bequeaths good luck and possibly gets a wish granted for you.

Gwibalgisul translates as ear-sharpening wine. People drink a shot of chilled rice liquor on Daeboreum believing one will only hear good news all year round and will hear better. Parents will dab a drop on their children's' lips to include them.

And there is music: singing, drumming, and dancing by the bonfires.

The Buk is a double-headed bass drum also played with sticks. (Wikimedia Commons)

Both are played to accompany singing or dancing for the First Full Moon Festival. There is also a small, high-pitched Gong called kkwaenggwari. Here is one example of orchestrated patterns from a Samulnori (Korean Percussion Ensemble Piece) played for the Fire Festival: