We are going to play some of the original Samba—Samba de Roda—for Carnival Monday in Brazil.

Samba is an immense topic. It is called the "National Dance" of Brazil; it is a recreational music and dance which the slaves on the plantations in Brazil developed during the 'leisure' time permitted them. The roots of Samba are obscured; even investigation into the etymology of the word points in many simultaneous directions:

"In Kimbundu samba means 'to be very excited, to be boiling over'; in the Ngangela language of Angola, kusamba means 'jump for JOY, skip, gambol'; to the Bango of Conga-Brazzaville samba means 'to dance the DIVINATION dance'; among the Hausa of Nigeria the sa'mbale is a 'dance for young people.' In the far north-east of Guinea-Bissau, samba is reportedly both a rhythm and 'the name of the singer and actor in a mime which represents a girl provoking a boy. The boy's name is Samba.' . . . In 1978 the scholar N'Totilu N'Landu-Longa came up with an alternative suggestion: that the word samba, as well as the dance of that name, derives from the Kikongo word sáamba, meaning originally the INITIATION group in which a person becomes competent for political, social, and religious functions. . . . These various explanations do not, of course, necessarily exclude each other."

"Some Candomblé Angola songs have the word samba in their lyrics, which in this context means to BLESS, PRAISE, or HONOR."

The roots of these rhythms and the accompanying dance forms evolving from and as an expression of a spiritual context must be remembered and respected even in the secularized versions. Samba can teach us that the expression of divinity is a continuous possibility!

"In Afro-Brazilian culture, dance is acknowledged as a significant cultural activity. Those who possess a superior knowledge of dance forms are seen as repositories of tradition and as scholars. . . . The houses of traditional Afro-Brazilian religious worship are filled with dance. In fact, WORSHIP cannot take place, cannot be meaningful, without dance." 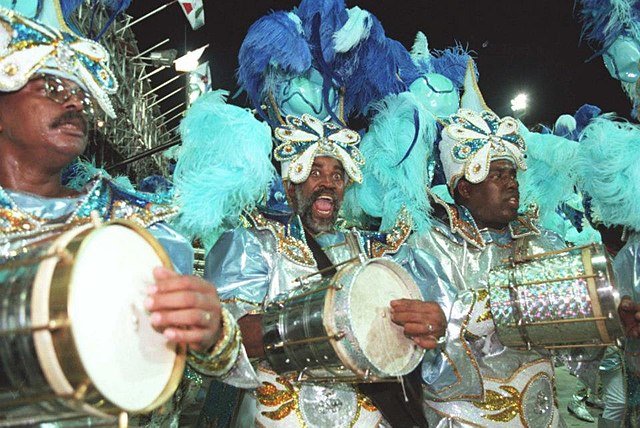 Samba de Roda is perhaps the oldest version of Brazilian Samba, this is performed with a ring of drummers and spectators and dancers taking turns entering the circle. Per Brundage, it originated with clapping, stomping, and thigh-slapping, and added found objects that made good sounds: spoons, cans, tables, boxes etc.

So let's get back to some of the deep roots of Samba by learning a few parts from Samba de Roda, the original, non-processional, neighborhood style of Samba.