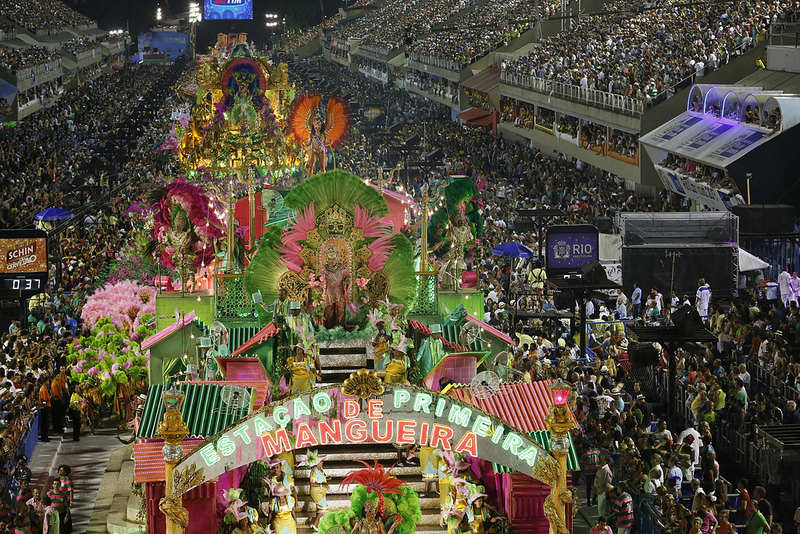 Carnival in Brazil is an annual festival held between the Friday afternoon before Ash Wednesday and Ash Wednesday at noon. This marks the beginning of Lent, the forty-day period before Easter, when Roman Catholics and some other Christians abstained from the consumption of meat or poultry. The term carnival came from carnelevare, meaning to remove meat.

So one might say that Carnival is a week-long party-hard  get-together to try and prep for putting up with 40 days of lent where one must follow the church rules and scrupulously avoid fun.

In the southeastern cities of Rio de Janeiro, São Paulo, and Vitória, huge parades with outrageous floats and dancers are led by baterias—samba schools. These are spectator events—the public is the audience watching the spectacle. They participate in state-sponsored competitions that, for the winners, represent immense prestige as well as funding enough to prepare for the following years' parades—a not insignificant amount given the cost of the floats, costumes, and drums for a percussion band that may number in the hundreds!

In northeastern cities (like Recife, Olinda, Salvador, and Porto Seguro) there are still parade groups but the public participates more directly with them. Carnival in these areas is very influenced by Afro-Brazilian culture and the crowds follow the music through the city streets, dancing and singing.

Carnival is the most popular holiday in Brazil. Festivities are intense, day and night, in the coastal cities. Rio de Janeiro's carnival all by itself drew 4.9 million people in 2011, with over 400,000 foreigners.

There are endless styles of Carnival Samba! One of my favorites is the interpretation the group Olodum put on the basic rhythm concepts. Here are several foundational parts from Olodum-style Samba: