The festival of the Orixá or Goddess Iemanjá (or Yemanjá) takes place in many places throughout Brazil, with the largest celebration of all in the Rio Vermelho neighborhood in Salvador. Everyone is dressed in white. Offerings are made to the Goddess, and the music and dancing continue all night.

In the Candomblé religion, Iemanjá, orixá of the sea, watches over sailors and fishermen and decides their catches. She is involved in every aspect of womanhood, fertility and family and is the protector of children.

Candomblé originated when slaves from West and Central Africa were brought to serve in Brazil. The colonial powers prohibited their African religions and attempted to force them to practice Catholicism. The slaves found similarities between the spiritual entities they knew in Africa and various of the Catholic saints. Iemanjá was perceived as sharing sufficient similarity with the Virgin Mary that the Africans were able to venerate Iemanjá in a new guise. This syncretic blending of the two religions gave birth to Candomblé.

The streets are decorated with roses and fish for Yemayá,
Goddess of the Ocean (Wikimedia Commons)

Iemanjá is frequently depicted as a mermaid. She is always dressed in either white or blue. Her devotees celebrate her holy day in many ways, running into the sea and jumping over seven waves to get closer to the goddess, throwing flowers into the sea, and offering her presents.Traditionally, these include beauty products (like lipstick, perfume, articles of jewelry, and even mirrors); white foods like coconut pudding or rice; and small boats with statuettes of the Orixá.

These gifts are brought to a temporary shrine, featuring a statue of Iemanjá, the day before the festival. At sunrise on her day, a fireworks display opens the festival and the offerings are taken to the shore to be blessed. In mid-afternoon, these gifts are loaded into the fishermen's boats which sail out to sea to make the offerings by placing them into the sea. If your gift continues out to sea, the Goddess has accepted the offering and the giver is blessed. (If it washes up on shore, it is felt the Goddess has rejected it.) 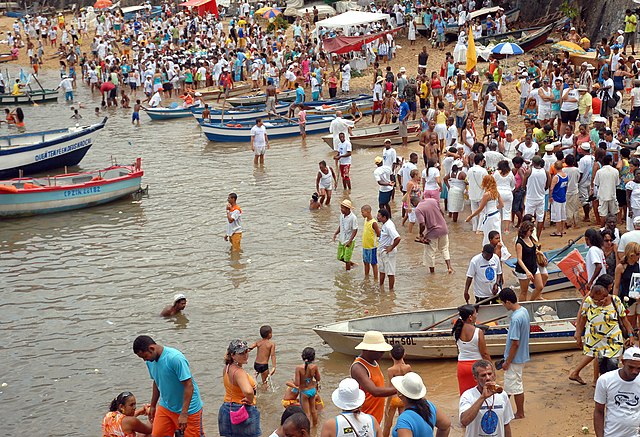 In Candomblé, the rhythm played for Iemanjá is called Arú. Kirk Brundage is a scholar of Brazilian rhythms and has published a series of 3 Afro-Brazilian Percussion Guides, one entitled Candomblé. Here are three of the patterns for the Arú rhythm for Iemanjá. Note: The Hun drum is played with a stick in the right hand; the left hand plays normally—very different sounds! This is why all the strokes for this pattern are left-handed.