Our modern Valentine’s Day is an opportunity for lovers to express their feelings, typically by sharing gifts.

The holiday's origins trace to the Roman festival of Lupercalia. The festival celebrated the coming of spring with fertility rites culminating in the pairing off of women with men by lottery. It is probably named after Lupa, the Wolf who nursed Romulus and Remus (Romulus was the founder of Rome). The vpriests who ran the shindig were called the Luperci. 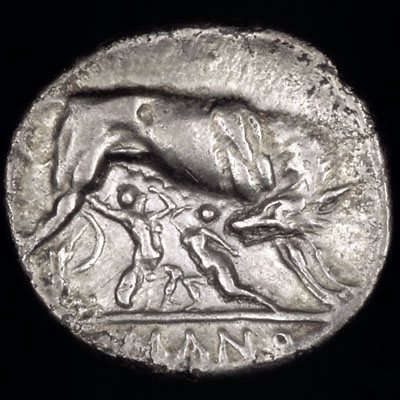 Per the Encyclopedia Brittanica:

Each Lupercalia began with the sacrifice by the Luperci of goats and a dog, after which two of the Luperci were led to the altar, their foreheads were touched with a bloody knife, and the blood was wiped off with wool dipped in milk; the ritual required that the two young men laugh. The sacrificial feast followed, after which the Luperci cut thongs from the skins of the sacrificial animals and ran in two bands around the Palatine hill, striking with the thongs at any woman who came near them. A blow from the thong was supposed to render a woman fertile.

At the end of the 5th C, the Pope (Gelasius I) replaced the fairly heathen Lupercalia with St. Valentine’s Day. It only became a day of romance from about the 14th century. The name may originate with a priest martyred c. 270 CE by the emperor Claudius II Gothicus. Per legend, the priest signed a letter “from your Valentine” to his jailer’s daughter, whom he had befriended and healed from blindness, and that's where the phrase originated. Another possibility is the story that St. Valentine defied the emperor to secretly marry couples to save the men from conscription into war.

Formal Valentine's Day cards started up in the 1500s with commercially printed cards starting in the late 1700s. This set the stage for the modern commercial ritual of cards, chocolate, flowers, bling, adult toys, and what have you.

The Guinean rhythms Yankadi and Makru are dances of seduction. From my Encyclopedia of World Rhythms, Volume 1:

Per Mamady Keita, "Yankadi and Makru together are a dance and rhythm for SEDUCTION." Yankadi is a slower dance where the boys and girls dance towards each other in lines. A whistle marks the transition to the faster Makru, where COUPLES DANCE individually. According to Michael Wall: "The essential elements are eye contact, flirtatious movements and touching your hand to your partner's heart."

To celebrate this day of connection and communication, nothing could be more appropriate than playing the Call and Response conversation from Makru!